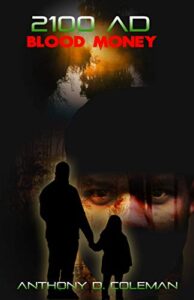 Imagine a world where crisis abound? Overpopulation leading to mass starvation and limited resources, devastating hurricanes, tornadoes, earthquakes and floods causing loss of property and lives, uncurable diseases ravaging humanity across the globe. Yet, most frightening of all, when disasters strike, it can bring out the worst in some of us. Unfortunately, that doesn’t sound too dissimilar from some of the challenges we face currently, but that’s what makes Anthony Coleman’s 2100 A.D Blood Money a great read for contemporary audiences.

Coleman, a native of Detroit, grew up with dreams of being an athlete, but like so many others, the goals of his youth shifted with age.  Now, one of his new goals is to show young black men, especially, that playing sports isn’t the only way to be successful. Without further delay, here’s my conversation with author of 2100 A.D Blood Money, Anthony Coleman.

Vernon E. Williams: So 2100 A.D Blood Money is a dystopian future novel where changes to the earth’s climate, exponential population growth, depleting resources, more severe natural disasters and increasingly devastating diseases have converged to create a constant zone of panic across the world. What sparked your inspiration to write this novel?

Anthony Coleman: I’ve always enjoyed reading and writing and excelled at it. I remembered one time in eleventh grade I wrote an essay on Bill Russell and Wilt Chamberlain. No joke, I was so good that my teacher assumed I had received help from home. It was in college however when I really knew that I wanted to eventually become an author when my professor told me I had a talent for writing. I’ve always been told that everyone has a talent, and for me to not put mine to use would be a waste.

VW: We are currently in the middle of the Coronavirus crisis. With part of your novel detailing a global disease pandemic, what are your thoughts on the virus, its worldwide impact, and the steps being taken to control its spread?

AC: I think this virus is something that is to be taken seriously…we’ve never seen anything like this before. I honestly believe that not the virus itself, but the effects of it will take years to get over. Like in my novel to deal with its pandemic, prohibition took place where all travel was banned as a form of containment and that’s what I feel should have happened when it first became known, especially when not much was known about it yet. In my personal opinion, I feel the nation is not going all in on what needs to be done just for the sake of the economy, when people’s lives are more important.

VW: Is the oppressive shelter regime, where those thought to serve and protect are actually responsible for the people’s plight a commentary on larger societal flaws?

AC: Exactly it’s a combination of multiple factors. It’s one of the main premises of not only the novel, but the entire series, since this book will be part of a trilogy. I wanted to make the scenarios as real as possible and as the story goes on the reader will understand and relate to the motivation behind the practices at the shelter, as well as the two antagonists. However flawed the execution of their actions are, they are for a purpose.

VW: Do you believe this future is possible, or even likely? What do you think we must do as denizens of earth to protect our descendants from this kind of fate?

AC: Yes, it’s very likely. In my opinion we as people give too much power to the government. Many of the factors that will lead to the world I depict are pure greed and not listening to the voice of everyone but just a certain few.

VW: You’re a native of Detroit. As a child growing up in the city, what factors do you believe led you to writing a novel like 2100 A.D Blood Money?

AC: There’s no denying that Detroit is a dog eat dog city. Unfortunately, a lot of people don’t realize that many Detroiters are in fact decent people who are often driven to crime to support their families. As a black man I’ve seen the effects of drugs and lack of opportunities. The area in Detroit where I used to live was a nice area and in less than 10-15 years it has now been dubbed “the red zone.” This book highlights the things people will do when backed into a corner, and I believe that’s what the reader will feel is the most relatable about 2100 A.D Blood Money.

VW: I also attended a community college (Columbus State Community College) and credit my experience there, and the relationships I built with my professors, for kicking off my writing career. How did that experience change your life as a writer?

AC: Like I said before, it was my professor that really helped me discover my talent. That’s why I recommend everyone pursue some form of higher education, it’s not only just a way to build your credentials for the real world, but also a great avenue to find out new things not only about the world but yourself as well.

VW: What passions outside of writing do you have? Can you tell us how these experiences may assist your career as an author?

AC: I’m a huge fan of the NBA. I was on my basketball team high school, and it was actually what I first wanted to do growing up. Eventually I may decide to become a sports journalist, it’s another area I’m exploring.

VW: Detroit has a very real and visceral part in race relations in this country. What moments in your life influenced your maturation? How do you want to create positive changes for black Michiganders and/or Detroiters?

AC: For those who have never been to Detroit, it is a city that is somewhat still segregated. Not too many African American men, especially those who are young, are into writing. I want to create change by showing that the way to success is not limited to whether or not you can put together a rap verse, or catch a football or shoot a jump shot.

VW: How can we keep up with Anthony Coleman? We can we find you and learn more about what you’re doing?